Ow! It can come as a shock when your baby pinches, bites or pulls your hair for the first time. What does it mean when your baby hurts you and what can you do?

Every child has angry feelings from time to time. Pushing, grabbing or biting is usually just a baby’s way of trying to get something or to find out how something feels or tastes. Sometimes, though, you do see real anger. For example, when you take something away or when your child cannot do something that he wants to do.

When infants show intense negative emotions, it is sometimes hard to tell the difference between anger, fear and discomfort. For example:

Some parents find it hard to accept that their babies have a full range of emotions, positive and negative. For example, when their infants yell or hit out in anger, the parents laugh and say, ‘Isn't that cute. He’s mad’. These parents are uncomfortable with anger in their children, so they make a joke out of it. The babies, seeing their parents laugh, can come to think that their parents actually approve of their angry behaviour.

The key is to accept the emotions for what they are and to set clear limits, even at very early ages, on aggressive behaviour.

You might be tempted to yell, slap or bite back. These actions would only startle your baby. Eventually he would learn to mimic them. He might even try the behaviour again, to see if it will produce the same intense reaction from you.

Biting a child back doesn’t stop biting. Instead a child is likely to learn by imitation to bite other people.

When you talk with your baby, use emotional (or feeling) words, such as ‘mad’, ‘scared’ or ‘frustrated’, that seem to describe his state of mind at that moment. Of course, it will take years for those words and concepts to really sink in, but over time, the words you say will have more and more meaning.

Eventually, your baby – at age three or four, sometimes earlier – will be able to use those words to describe and take control of her own feelings. 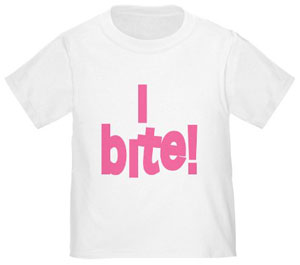 When should this behaviour stop?

Even with the best, consistent teaching, toddlers might not stop biting, pinching, or pulling right away. A young child stops pinching momentarily in response to being told ‘no’. In a few moments, though, she might be back at it again. Gradually, there is less and less of the aggressive behaviour.